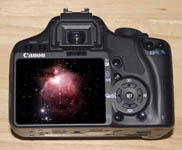 7. Open the camera back from the top end by prying it with your fingernails so that it hinges at the bottom where two ribbon cables are connected. 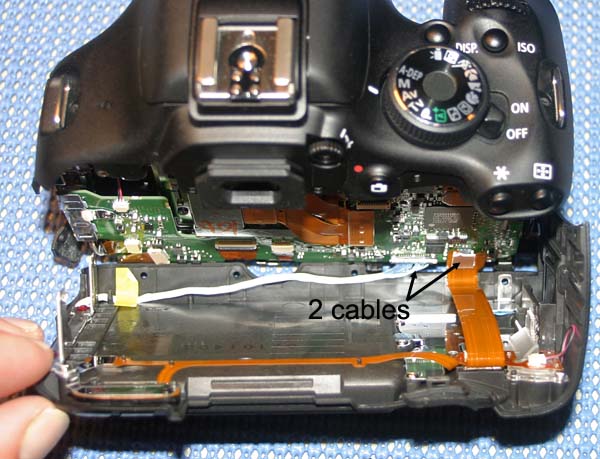 8. The two cables connecting the camera back have pop off connectors. For both connectors, pry up the end of the connectors to loosen them for removal. The orange ribbon cable is easy to remove. Be careful when removing the white cable from its connector; I used a small flat head driver to gently pry one metal end upward. Do not force the white cable connection. It should disconnect easily. Avoid contacting the circuit board near the connector. When disconnected, place the back of the camera in a sealed container. 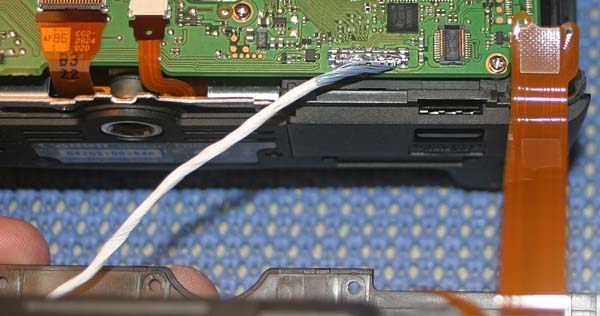 9. In the photo below, the ribbon cable connectors are labeled "A" through "J" for reference. We will disconnect all of these ribbon cables in the next steps. It is important to note how far each cable is inserted in its connector for reassembly later. You may want to mark each cable with a fine tip black marking pen before removal as a visual aid for judging how far the cables need to be inserted.

C: This is a "slider" type of ribbon cable connector. Use the edge of a razor knife to loosen and remove ribbon cable with tweezers.

D & F. These are "pop off" (plug type) connectors. Lift the connector off with a tooth pick or your fingernail:

H. Disconnect white connector on edge of circuit board with a flat head jewelers driver. There are plastic notches on each side of the connector to help with this. This is just a pull out type connector.

All the ribbon cables "A" through "J" have now been disconnected:

10. Remove three small screws and two long screws as shown in the photo below:

13. For the 700D model only, there is an extra black plastic piece shown in the photo below that needs to be removed:

For the 700D model remove the black plastic piece:

14. The CMOS assembly unit is held in place with three Torx head screws that are also used for adjusting focus and tilt. These three screws need to be returned to their original position later in order to maintain accurate focus.

One way to do this is to place a mark on each screw head and note or mark its position. Turn each screw inward while noting how many turns until the screw is fully seated. During re-assembly you will need to fully seat the screw and use the mark as a guide for loosening the screw the correct number of turns for each screw.

Another way to do this is to etch a thin line on the black plastic pin that sticks up through the shim of each mounting screw. This etched line can then be used as a guide during re-assembly.

Another way is to measure the length of the black plastic pin that sticks up through the shim of each mounting screw and a make a guide that can be used during re-assembly.

15. The next step is to remove the CMOS imaging chip/circuit board assembly. Be careful when removing it because there will be an exposed filter on the back side. The assembly needs to clear small black pins first to become totally free. Here is the assembly removed:

Continue with steps to remove filters from sensor