All images taken with C2020Z and 20" Starmaster 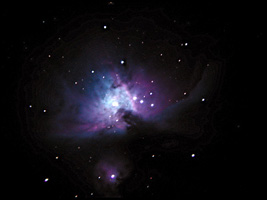 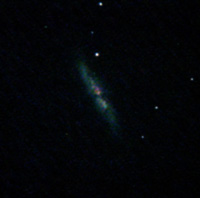 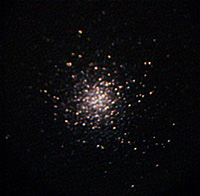 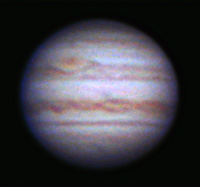 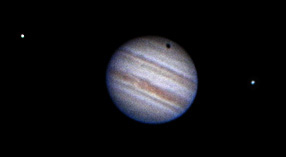 The following is an update to the discussions and images in PART 1 , PART 2 and PART 3 concerning use of the Olympus C2020Z digital camera for deep sky imaging.

I have been exploring ways to extend the maximum 16 second exposure of the Olympus C2020Z digital camera.

Jens Sandalgaard Flak has discovered an undocumented feature of the Olympus C-2000Z that allows the camera to take exposures up to 32 seconds.

Jens: " If you set the camera to any shutter speed between 1s and 16s AND enable spot metering, the camera will automatically select the shutter speed, based on the brightness of the scene (spot metering). I have gotten exposure times as long as 32 seconds. Even values between the standard values are possible, like 6s or 13s or 25s etc. The downside is that you can't see the exposure time in the EXIF info. If you selected 1s and the camera actually used a 32s shutter speed, it still says 1s in the EXIF info. It seems the only guideline here is that if the EXIF info says 1s or longer and spot metering, the shutter speed could be anywhere between 1/800 and 32s. Please note that this mode does not work with the F11 setting. The metering seems to be calibrated for F2-2.8 only. BTW: I have the v951p-80 PAL version."

According to Jens, the camera needs to be in the "S" Shutter Priority Mode, with spot metering enabled. "On the 2000z the exposure number turns red in the display when 1s or longer is selected (Holding OK while adjusting beyond 1/2s). It is still possible to adjust ISO and focus. There is no way to tell how long, except for timing it manually. Keep in mind that the camera uses (spot)metering, so if you point the camera at a bright subject, it will select a short shutter."

This undocumented feature works with the OLY C-2000Z but I have had no success using it with the C-2020Z. Because the C-2000Z functions with this trick to get up to 32 second exposures, I am hopeful that similar shutter speeds can be attained with the C-2020Z using computer software (see below).

TsuruZoh Tachibanaya has developed computer software (Freeware) called CAME that is a digital camera control utility for Win95/98/NT and Agfa, Epson, Sanyo and Olympus digital cameras. The latest version of CAME software can be found on his site at: 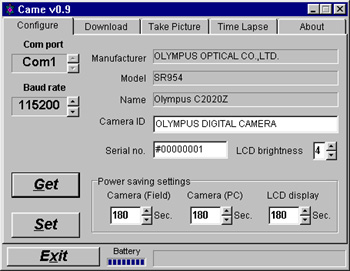 The CAME software can transfer images from the camera to computer like Olympus's Camedia Master software, but in addition it can control the image-taking functions of the camera and also do time lapse imaging, all via the serial cable connection. The software even provides a live quickcam type image display function for your digital camera. These are great features for remote controlling astro-imaging.

CAME software uses CAMERA.INI files for specific cameras. These files can be edited with a plain text editor such as notepad. CAME does not come with a CAMERA.INI file that includes the Olympus C-2020Z data, but I have created one that works for most functions. (Hold down the shift key and Click Here for my C-2020Z CAME CAMERA.INI file).

UPDATE: Jean-Pierre Gleyzes of the CNES has created a camera.ini file that allows the use of all the quality modes : VGA_poor, VGA_high, up to TIFF. Click Here to download. Remember to change the name of the file from CAMERA.TXT to CAMERA.INI 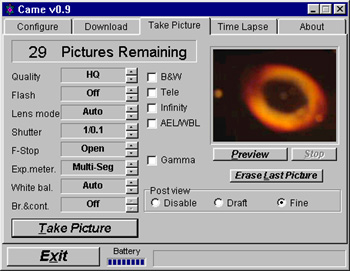 I have written this CAMERA.INI file to set the maximum shutter time to 16 seconds (16,000,000 microseconds). The CAME display window shows shutter speeds as fractions of a second. A selected setting of 16 seconds is displayed as 1/0.0 in CAME's display for the shutter. I have found that the maximum exposure attainable using the CAME software is 4 seconds. I believe this is because the CAME software does not have a command to place the C-2020Z in "manual mode" to allow 5 to 16 second or greater exposures. If I can get the software to send shutter values in the camera's manual mode, exposures exceeding 16 seconds may be possible.

This software is command-line oriented and does not make use of a graphical user interface (GIU). By using this software with a "batch file", or a Windows short-cut icon, the C-2020Z's imaging functions can be controlled remotely as with CAME and photos can be quickly downloaded from the camera to a PC via a serial cable. I have found the same limitation with this software as with CAME; the C-2020Z can not be placed in manual mode to allow longer than 4 second exposures.

Tip: In cold weather I have found the C-2020Z's remote to function poorly or not at all. Using CAME or PHOTOPC the shutter can be triggered via the serial cable without introducing vibrations.

If the protocol for the C-2020Z was known, I may have had more success in getting the above programs to lengthen shutter speeds for deep sky imaging. An Olympus Software Developer's Kit is available for the C-2020Z and other Olympus digital cameras, see:

From this site, I have ordered the GOLD version of the SDK that allows full control of the camera including image capture.

UPDATE: I received the Olympus Camedia Gold Version 1.5 SDK and was disappointed. The SDK appears to have been prepared to address mostly features for older olympus digital cameras. According to the SDK documentation, the "Set Exposure Time" feature has a maximum shutter time of 1/2 second. I received a message from an Olympus systems engineer concerning computer control to set the C2020Z in "Manual" mode to allow greater than 4 second exposures. His message which follows appears to rule out the possibility of serial commands to do this:

There is a trick to enable an undocumented extra Macro Mode for the C-2020Z that may be useful for eyepiece projection afocal astro-imaging. It allows the camera to get clear focus at 2 to 3 inches distance from the camera. Patrick Timlin has explained the trick as follows:

1. Turn on the LCD to monitor focus.

4. Tap the wide button (on the camera or the remote) a few (about 4) times. On the first tap the lens will move a noticeable amount but the following taps hardly move the lens at all and the image will come into clear focus.

5. Now the camera can be adjusted to the wide lens direction and the focus remains clear.

- Press "OK" plus the "down" button on the hat at the same time.

- Press "OK" plus the "take picture" button at the same time.

- Again, press "OK" plus the "take picture" button at the same time.

- Press "OK" plus the "down" button on the hat at the same time.

- Camera is now locked less than or equal to 1/30 second shutter speed.

Any comments or suggestions, please email me at: ghonis@epix.net

TO MY QUICKCAM PAGE