(Note: Instructions would be nearly the same for the C2020Z) 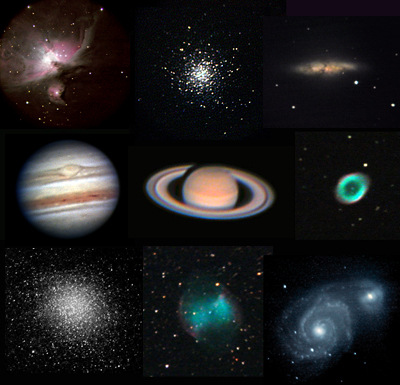 Disassembly of an Olympus C2000Z:

Detailed below is the procedure I used to disassemble a C2000Z. My goal is to make a cooling system for the camera to cool the CCD chip in order to reduce noise. The C2000Z is capable of 32 second exposures using a trick as explained on my site at Part 4 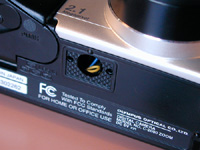 Upon disassembly of the camera, I removed the camera's tripod connector, See pic. I will use this opening in my experiments at air cooling the camera. This opening is sufficiently large and is in the area of the CCD chip and camera electronics. There are a number of small openings elsewhere in the camera for air exhaust. I need to develop a method of creating the cold air to circulate through the camera. I have some ideas, but if anyone has any suggestions please email me at: mailto:ghonis@epix.net

If I am not successful at air cooling or satisfied with its results, I may attempt peltier cooling. (See my peltier/fan cooled quickcam page) When the camera housing is taken apart, the back side of the camera housing contains only the LCD display that is connected with a cable. (See pic in STEP 10 below) A peltier device/cold finger could be connected to aluminum shields that are located on the electronic boards behind the CCD chip and a new back housing fashioned to accommodate the peltier/heat sink. Since the LCD display is connected via a cable, it could be relocated on the newly fashioned housing. This may be enough of a cooling effect for 32 second images. A more drastic hack would be to dismount the circuit boards in order to get at the CCD chip directly for peltier cooling. I suspect that the CCD chip may use an aluminum plate, that I saw with the camera open, to dissapate heat; but I could not verify this without further removal of the circuitry.

Warning!!!! Proceed at your own risk. This procedure will void your warranty from Olympus. After disassembly and reassembly, my camera functioned properly, but your camera may not. 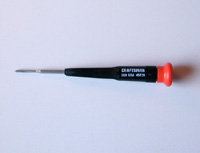 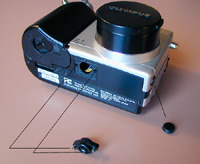 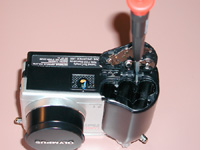 Remove three black screws in back plastic housing at three corners. Note that the upper right hand corner, as viewed from the camera's back, is a longer screw than the other two screws. See pic. 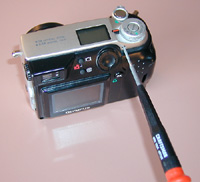 Remove silver screw on back of metalic trim near dial. 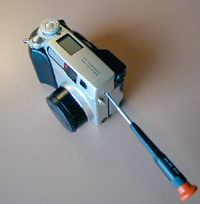 Remove silver screw from the metallic housing on right side of camera as viewed from the front. See pic. 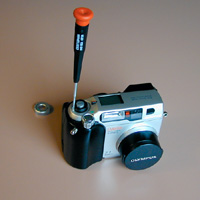 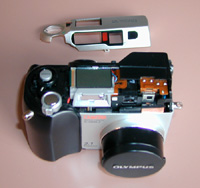 Remove black screw from upper right corner of housing from front., above and to the right of the camera lens. This screw is set back in a recessed area about a half inch. Be careful not to lose screw - use a magnetic driver. See pic. 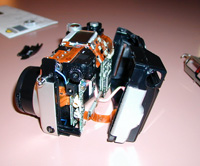 Note: This is a large image in order to show detail.

Separate front half from back half of camera housing. The battery cover and smartmedia card cover may fall off at this point......these are easily put back in place upon reassembly. 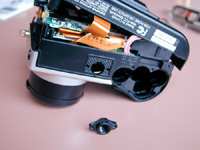 Remove the black plastic tripod connector - this port can be used to air cool the camera.

Reassembly is the reverse of disassembly.

TO MY QUICKCAM PAGE